Syngineering is our approach for changing the way change and operations are done. The term is made up to integrate the polarity of the mechanistic enGINEERING of an organization’s visible structures with the dynamic responsiveness of living systems, which are for us represented by humanistic SYNergies. We use this framework to integrate and balance the dynamic capabilities of living systems with the necessary stable structures required to deliver customer-oriented outcomes, tailored to every specific operating circumstances. This is also the foundation of agility. 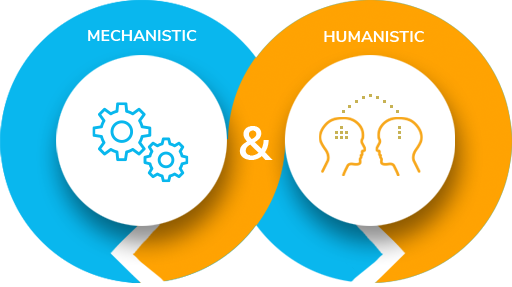 The mechanistic aspect is based on the scientific method, rational, linear problem solving, and authorities are fixed through formalized roles, procedures and practices specialized functions. These mechanistic aspects are relatively easier and simpler to organize, but rapid change is very challenging. We often unconsciously think of organizations as only the mechanistic aspect. They emerged and created great wealth and benefit in times that were far less complex and volatile than the last 75 years. The problem with only having the mechanistic was recognized by Max Weber, the father of bureaucracy, writing in the early 20th century, said bureaucracy is perfected the more it is dehumanized.

The humanistic aspect is based on human or living systems perspectives. The implications for organization design is that attention to the flows of information, energy and matter. Organizations are greater than the sum of their parts. Being made up of human beings, they can be conscious, aware of themselves, and respond creatively, but only if they intentionally develop those capabilities.These organization are characterized by distributed and informal decision making, and relationship and human based interactions. They focus on teams and collaboration.

Effective organization design and change depends on balancing these two essential and interdependent aspects. In Syngineering, we recognize that the exact balance depends heavily on the organization’s landscape, it’s internal environment and eco-system.

Syngineering takes a global, cross industry, and interdisciplinary perspective to deliver readers with four concrete yet adaptable ways to build agility into any organization. It is the result of a nine year global collaboration with the innovative leaders, practitioners and clients pioneering agility.